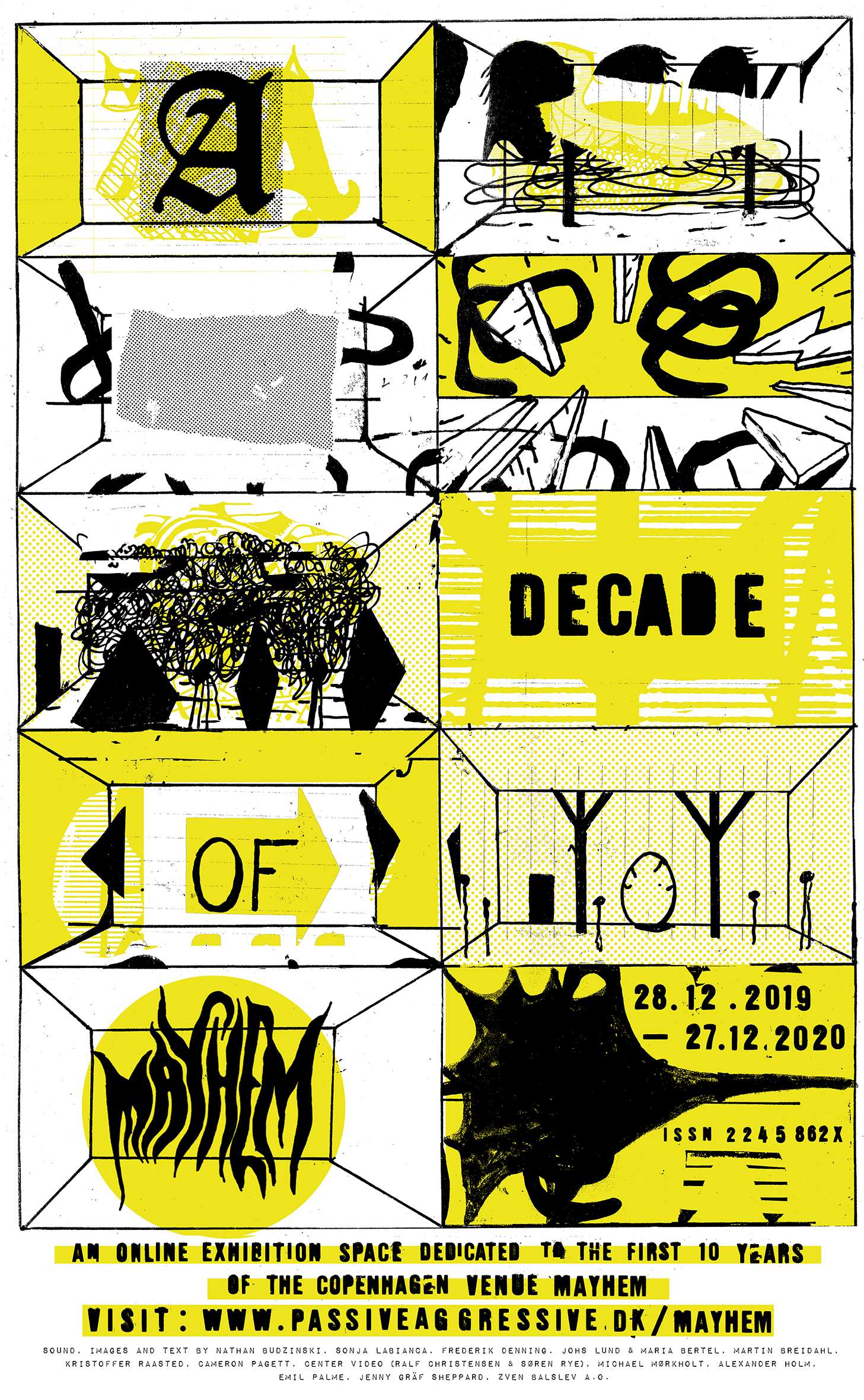 Ten years ago – on December 15 2009 – the entity we now know as Mayhem was officially established. The Copenhagen venue, which also contains rehearsal spaces, music studios and artist workspaces, hosted its first concert in March 2010 and has since presented an impressive number of artists within the realm of ‘extreme sounds’ of both international and local acclaim. This has only been possible thanks to its many independent organisers, an ideological commitment to being a nonprofit venue and a thorough understanding of the balanced relationship between audience, artist and host.

To celebrate the first 10 years of Mayhem, Passive/Aggressive proudly presents an online exhibition space that will show the diversity of the community around Mayhem. It will tell some of the many many stories of this cultural landmark’s origin, explore its future possibilities and consider its relevance for other DIY-spaces. With contributions (sound, text, image, data, graphics a.o.) from writers, musicians and visual artists, A DECADE OF MAYHEM will evolve throughout a year, following the exhibition’s opening on 28.12.2019 and continuing until 27.12.2020.

Since its inauguration as a concert venue in the spring of 2010, Mayhem has presented such an varied array of singular artists such as Wolf Eyes, Robert Turman, Merzbow, Nurse With Wound, Dedekind Cut, Yves Tumor, Jefre Cantu-Ledesma, Peter Brötzmann, Joe McPhee, Chris Corsano, Rhys Chatham, Smegma, Tony Conrad, Drew McDowall, Graham Lambkin, Akitsa, John Duncan, Mohammad, Evol, Maria W Horn, Kali Malone, Pharmakon – alongside local heroes Puce Mary, Selvhenter, Iceage, Damien Dubrovnik, Frisk Frugt, Synd & Skam both on stage, behind the bar and as organizers. Also it is well worth mentioning the many independent actors in the scene from volunteer organisations, record labels and physical record stores, music collectives, experimental festivals, literary societies, fanzines and one-man-operations presented many of these highlights and as such the core of the musical profile was defined not by the caretakers but by the collective effort of individuals.

Founded by musicians Tobias R. Kirsten, Sune TB Nielsen, Johs Lund and Maria Bertel in 2009, Mayhem as a venue was initially discovered by the local concert promoter KNTN, but within the first months of 2010 it took it form as we know it today with a small group of caretakers open to large community of individual organizers, often people who shared the rehearsal spaces at Mayhem. Until this day the venue has kept a nonprofit profile. 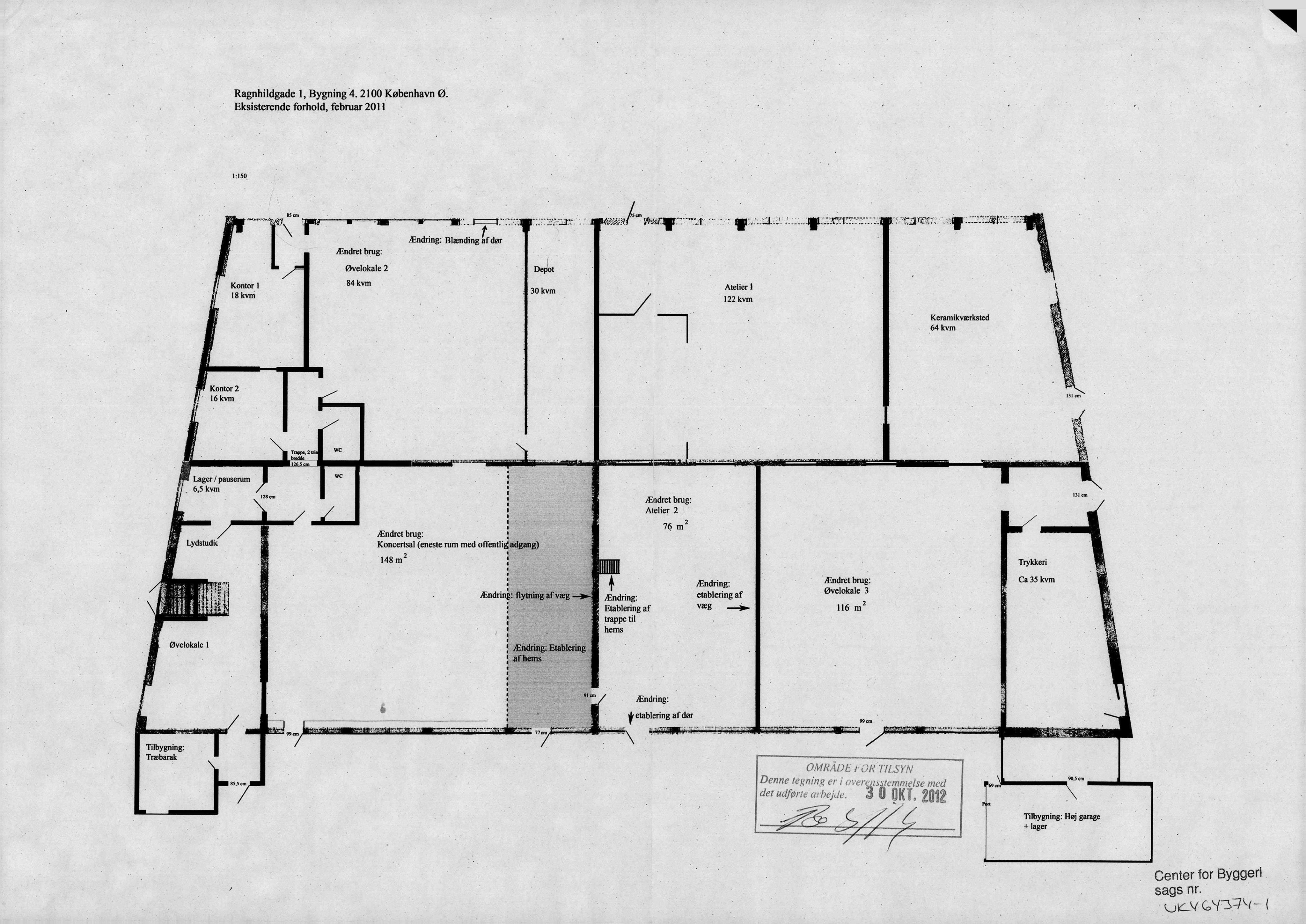 Located on municipality grounds on Ragnhildgade 1 (5,060 squaremeters of which Mayhem covers approximately 800) along with similar social and creative nonprofit organizations, Mayhem was originally paying rent directly to the municipality of Copenhagen but the area was constantly in a potential danger of eviction. Culminating in the spring 2016 the longterm existence of the area was secured through the establishment of the Ragnhildgade Foundation, led by layer Knud Foldschack to handle the lease, and as a result all non-profit spaces at Ragnhildgade was given a minimum 4 year term of notice.

In 2017 the four founders then passed on the keys to the venue to the three musicians and Mayhem regulars: Bjarke Rasmussen (Infinite Waves, Grøn), Martin Schacke (Moral Defeat, Schacke) and Jesper Bagger Hviid (Korpsånd, producer).

Contrary to common belief Mayhem does not receive hidden public funding through the lease contract with the municipality (an assertion latest voiced at the Passive/Aggressive panel debate in Ark Books in November 2019). The foundation secures only a rent level on free market conditions, taking the state of the buildings into consideration, and the aforementioned negotiated term notice.

In 2020 Mayhem is getting approximately 85.000 dkk in public funding from the state and municipality combined. In comparison the appointed regional venue at Nørrebro gets 5.600.000 dkk in 2020. Instead the general expenses of Mayhem is covered by the bar and the shared rent of the rehearsal spaces. 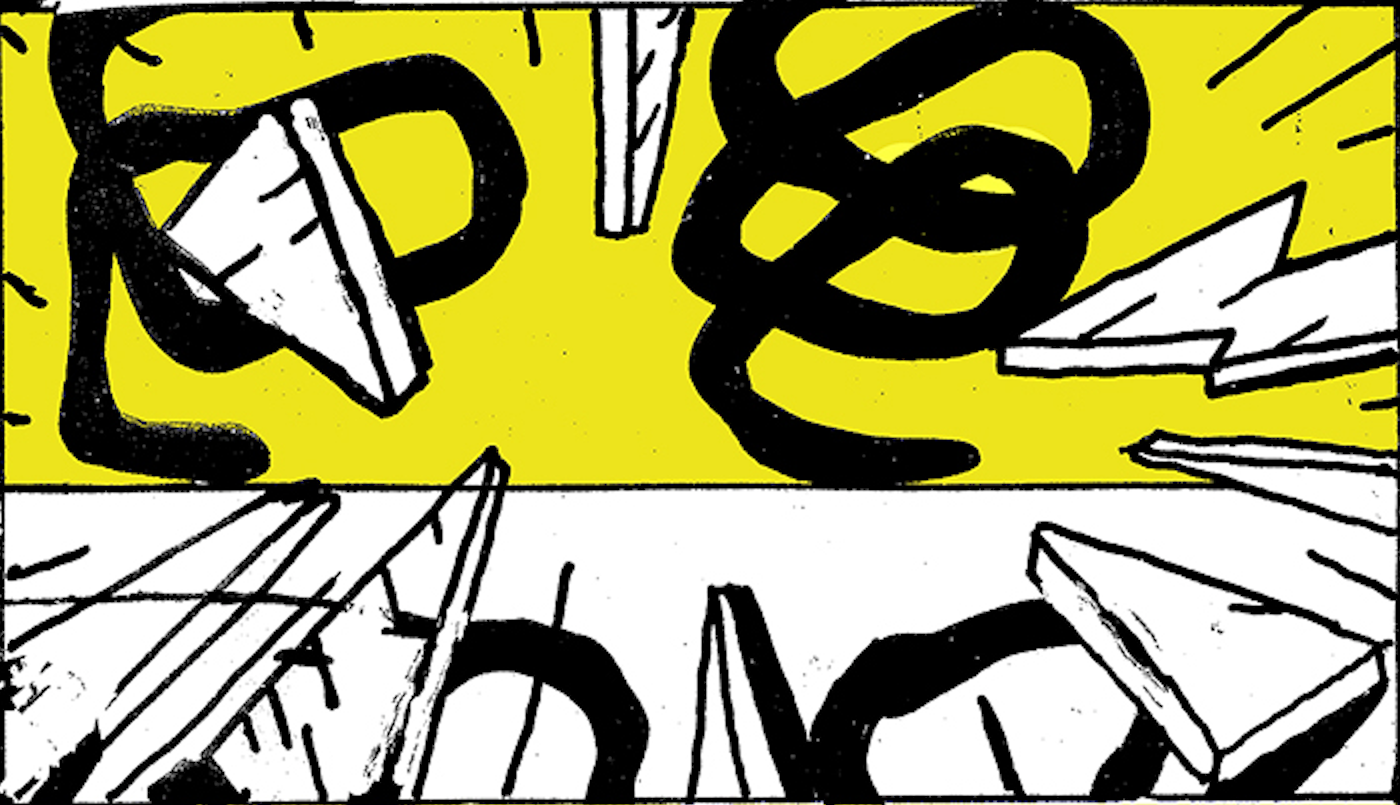 This publication is made with support from Statens Kunstfond and SNYK. Based on an idea by Mikkel Rørbo. Illustrated by Zven Balslev. Passive/Aggressive is nonprofit.