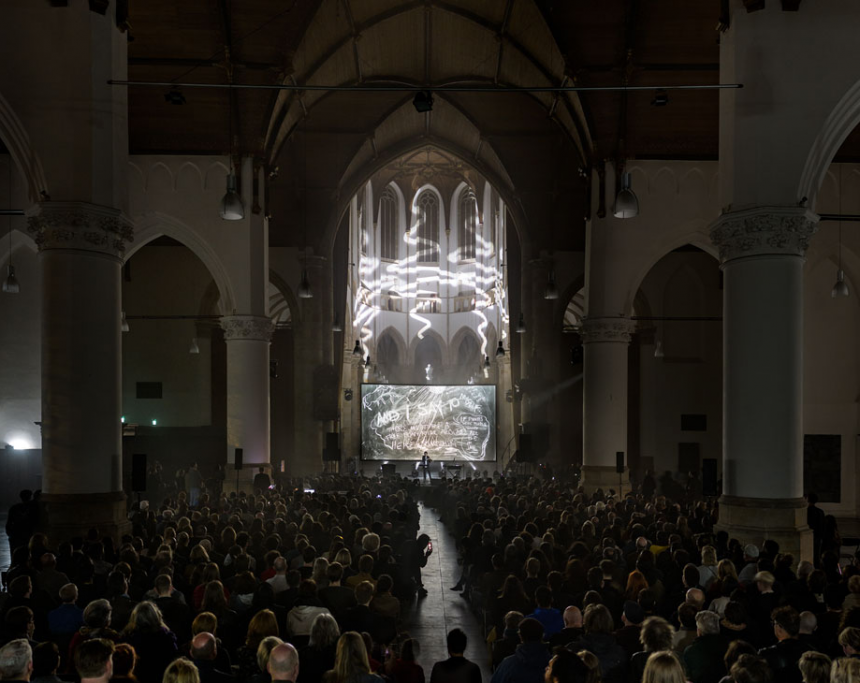 In its 8th year Rewire Festival – The Hague’s festival for adventurous music – is adding a new concept to the already progressive programming. The Artist In Focus strand is the festival’s attempt to go further in-depth with two selected artists; a headliner and a New Artist in Focus, i.e. an upcoming artist. Each artist participates in talks and performances and has several works presented in various forms throughout the weekend.

This year’s Artist in Focus is befittingly Laurie Anderson. Crossing decades, music genres, and art forms she makes a perfect – and very popular – first pick. She hits squarely in the musical heart and head of the Rewire audience.

Anderson’s residency at Rewire starts with a screening of her 2015 film “Heart of a Dog” about LolaBell, her deceased rat terrier. The death of Anderson’s dog inspired her to make a film essay about life, learning, love and loss in general. The film is a meditative film pieced together of prose, chalk drawings on blackboard (preferred for their temporality), Super 8 footage and archive material manipulated to make the whole experience that of a dream.

These elements are present throughout Anderson’s many performances over the weekend. Saturday afternoon Anderson is in conversation with Wire magazine’s supervising editor, Emily Bick. The conversation flows like a chat between old friends, Bick and Anderson clearly being familiar with each other and not least each other’s work. Functioning as a broad retrospective of Anderson’s oeuvre, the talk sets a perfect framework for the following performances. As an unannounced guide through the current near-end times, Anderson’s warm wit and calm reflections bring a refreshing sense of constant wonder into the picture. Embracing the inevitable and finding sense in the senseless.

Despite Anderson’s insistence that she couldn’t write The Kronos Quartet a string quartet – when they started their co-joint project leading to this year’s release, “Landfall” – she’s clearly very able. A few hours after her talk she presents the Ragazze Quartet’s performance of her string quartet “Sol”, which she wrote in 1977 in memory of her mentor, the artist and sculptor Sol Lewitt.
The theatre has been cleared and in the centre of the open space the Ragazze quartet stand in a circle facing each other. The audience are spread 360 degrees, the light is low, and the floor is littered with cushions and bean bags. While invited to experience the music as the installation piece it was intended to be, most people lay back and listen intently to the intricate figure 8 melodies swirling in and out of each other, with a large disco ball spinning around silently above, casting a myriad of light spots into the darkness. The concert is intimate and meditative. As the music repeats minimalist patterns a sense of hypnosis sets in, which comes to an end as the music somewhat suddenly begins to build as if getting closer to surfacing from a deep sleep. Everyone comes out of the room a bit dazed.

It’s difficult to describe Anderson’s festival finale performance in The Hague’s Grote Kerk (big church), a beautiful setting with predictably grand acoustics. Rewire has an exceptionally high production value on their shows, meaning that lighting and sound is generally excellent and the concert experience is taken to another level. The queue snakes around the block, and as the sun sets, the cold creeps in. Inside the church there is a low stage holding a table with assorted tech, an amp, an arm chair with a small table, and a large screen backdrop. Anderson appears and takes a seat in the chair. Chalk drawings on blackboard illustrate her words, each drawing photographed and stop-motion animated until there is nothing left of the original but the dirty white streaks, like ghosts of words and images.

The over-arching theme is loss: Loss of people, things, memories and purpose. And elections.
Before performing any music the performance requires a brief bit of audience participation; Anderson describes the eerie silence across the city the day after the latest presidential election. Pierced by a terrifying scream which she has been hearing daily since: That of Yoko Ono responding in one note to New York Times’ request of her for a response to the 2016 election result. So to set the scene the audience are invited to scream with Anderson. From the pit of our stomachs. For 10 seconds. It’s exhilarating. Then the music begins.

She moves through themes like home – the US being at war with itself and what this means for the times we live in – and stories: How do we tell about the end times, and who will there be to tell it to? If no one’s listening, is a story even a story? She describes it as a new existential crisis; we each have our own story we subscribe to but we don’t even really know what a story is anymore.
Anderson is dry and funny and movingly reflects on life with Lou Reed by addressing the loss of all future conversations with him after 21 years of having access to them. In general she found that upon losing all her archive and a lot of synths and other hardware to Hurricane Sandy, that merely noting them down and remembering them was enough. She quickly after felt relieved at the forced loss of things. Knowing that memories persist.

She demonstrates Tai Chi, described as fighting or dancing with a ghost, which seems pertinent on the back of her reference to her departed husband. She references Henry Thoreau’s Walden cabin – famously isolated in the woods – noting that it was in fact merely yards from the marital/family home which Thoreau was so disillusioned with.
She addresses technology, how we must start to realise it won’t save us, and rather than relying on it for that, merely use it for the things where it’s genuinely useful. Language in the future is digital; switching on and off like a current running through our bodies. Her alter ego/clone Fenway Bergamot appears a few times, sounding a bit creepy and distorted in the big room.
And she part tells the story of the ancient Greek play “The Birds” by Aristophanes, drawing analogies on walls and borders. Between anecdotes, musings and dry wit she weaves in a stream of music. Playing her violin to a paired back track of the recent Kronos Quartet recordings, or songs and music from “Homeland”, “Heart of A Dog” and older releases.

When Anderson talks about Buddhist teachings, it’s non-imposing; it’s as if she merely passes on her learning to her audience, by encouraging us to live in the moment and reflect over the world we’re within, without losing sight of the importance of remembering that we’re here to have a good time!
There are several ways of doing this; learning to feel sad without being sad; being afraid of No-one; and getting and using an excellent Bullshit Detector.
Suitably for the space it’s very much a spiritual experience, only it’s led by the godmother of experimental electronic art music. This would have made first communion a lot more fun!

There are many more artists in programme worth exploring as well as the debate and discussion forum the festival aims to create in the progressive arts, by insisting that artists ideally should us their voice to be heard and actively engage in the world they reflect. The following are only a few examples:

A hooded figure is stood facing the back of the stage leaning over the mixing desk. We never see a face or even much movement, but the sounds and visuals speak for themselves. Fatima Al Qadiri has put us in a dark place, so we may as well dance.
Heavy bass, ambient, warbling keys and slowly buoyant synthetic sounding beats blend into an intense soundscape. Samples of Arabic voices and news soundbites lie low in the mix, making it slightly disorientating; a sense which is heightened by copious amounts of smoke pouring out from the side of the stage and into the triple level club venue Paard 1.
Dreamy pastel colours meld into primary colour patterns, framing Al Qadiri as a lone silhouette against the smoke and the projection. Refusing to engage, or even seemingly register the presence of the audience keeps the focus firmly on the music and allows for the audience to somewhat hypnotised follow the gentle build up as Fatima Al Qadiri opens the ball for the night.

Chino Amobi’s show juxtaposes Kanye-esque dancing and gesturing with Moor Mother-esque confrontation and sound.
As per all computer-based artists on Rewire Amobi stands at his desk with sizeable monitors blasting his own sound back at him as he’s sending it into the room with shuddering bass, abrasive distorted shouting, Bulgarian choir samples and a constant projection back drop of shoot out video game footage, blurry news footage and a haunting image of identity papers floating in water.

The whole experience is like being in an aural war zone, and Amobi keeps cranking up the atmosphere as he plays ‘hits’ like the trumpet sample driven “Blackout”, sounding distinctly like the heralding of a battle. The full effect is intense and heightened further as he jumps into audience with his mic, shouting and dancing creating a shawl of equally fascinated and slightly intimidated festival goers, partly partying with him and making sure not to get in his way. Amobi’s music has been described as “violent music for violent times”, and it’s difficult to put it much better than that.

Chino Amobi’s latest record, “Paradiso”, was featured on P/A’s best albums of 2017 list). He will perform at this year’s Click Festival in Elsinore.

Juliana Huxtable is one of the artists who are pre-setting their shows by taking part in the festival talks programme. The day before her performance she discusses her work focusing on gender, race, queer politics and approach to online activism, and talks at length about addressing political differences and social media conflicts by engaging with trolls and focusing on the shared experiences as opposed to perceived differences.
At her concert these themes are explored in the spoken word she performs to an underlay of electronics, paired with harp and drums + piano, performed by Ahya Simone and Joe Heffernan (a regular collaborator of Huxtable’s) respectively.

The trio perform “Triptych”; Huxtable reading out and part singing – and distorting – personal reflections on love and desire, sexuality and discrimination. In a dramatic white outfit and high heels she claims a lot of space in Grote Kerk, and her no holds-barred lyrics reverberate around the room, creating an effect of several voices shouting pushed along by thunderous drums, sparse piano and surprisingly powerful harp. The experience is partly like an exorcism of failed gender politics, part performance art and fully a roar against binary led conservatism as embodied in the performance space. It works beautifully as an example of the festival’s innovative programming and use of space. 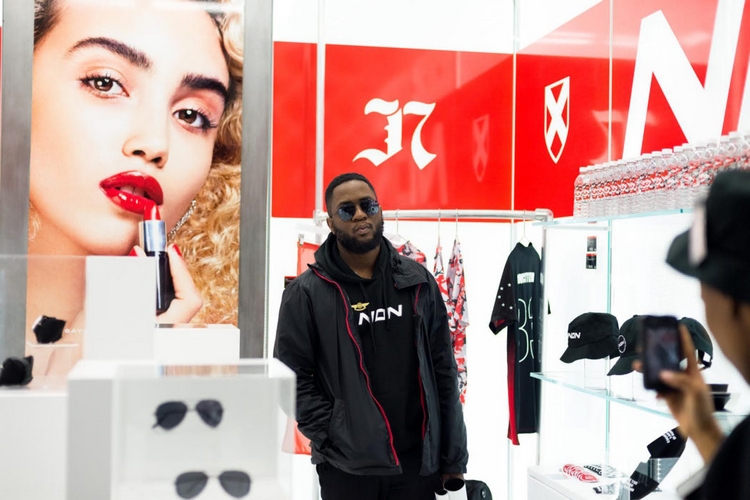 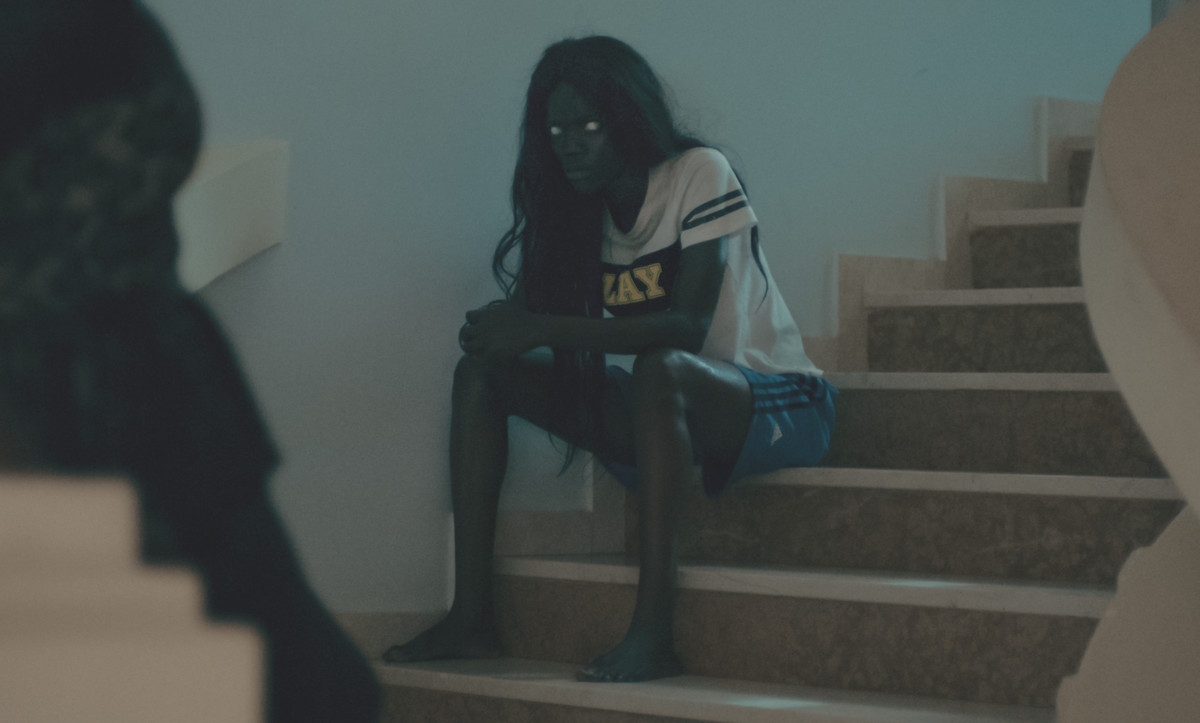