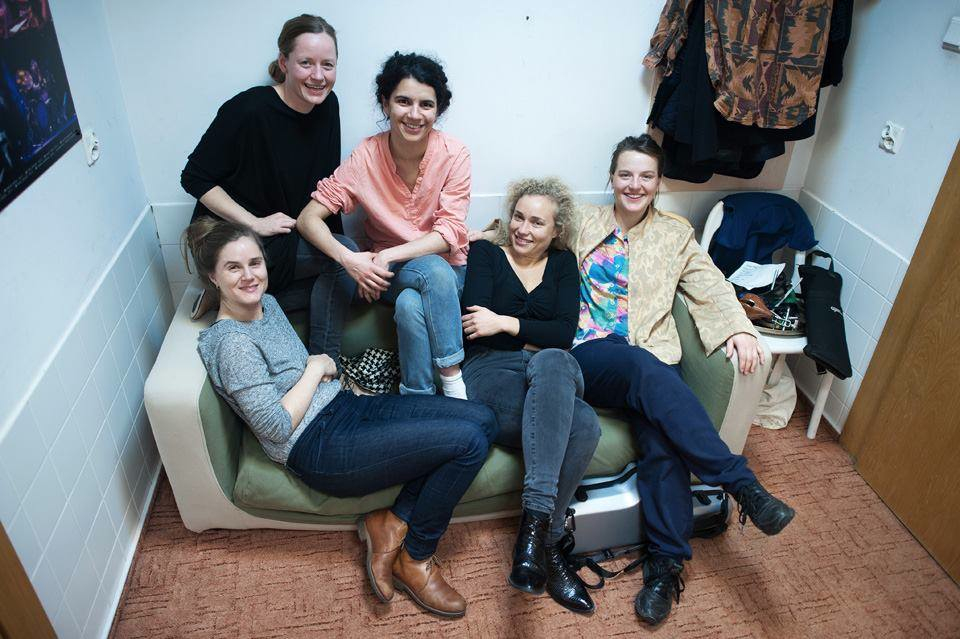 It starts raining round about the time when Selvhenter have finally crossed London Bridge. Big, heavy, audible drops. In a city dazed by impending downpours, a sonic weather system is descending on Dalston and Cafe Oto. Most people wouldn’t know it, but those who do, are in for a treat that evening.

Cue Selvhenter. The band, in its current constellation, has existed since 2011, forming in the musical milieu of Mayhem in northern Copenhagen. The band consists of Jaleh Negari on drums, Sonja LaBianca on saxophone, Maria Bertel on trombone, Maria Diekman on violin and Anja Jacobsen on drums. The latter on maternity leave for the time being.

We sit down for a chat to discuss the new 7” “New Age”, released in collaboration with The Ex, as well as the workings and dynamics of Selvhenter. The devil will reveal itself in the detail. Throughout the interview there is a lot of engaged and thoughtful dialogue and laughs between the travel weary band members, and a few excited mentions of new effect pedals too.

P/A: Tell us about “New Age”; it’s got a very brooding tone, what’s the story?

Maria Bertel: “It was actually our attempt at New Age music. I’ve been listening a lot to JD Emmanuel, though perhaps that is a bit too dark. But I was very inspired by the aesthetic. So we tried out a lot of things. Some worked, others didn’t.”

Maria Diekman: “Yeah, I’m sad thinking about where it [the track] was before it ended up where it is. We talked a lot about New Age [music] and then it headed in a different direction.”

P/A: Yes, ‘cause when you say New Age, you think ‘wind chimes’. And this is something very different, much more dark?

Jaleh Negari: “We have talked about how going to a spa/ relaxation place and hearing that kind of New Age music can almost cause us to tick. This track is [to us] really smooth and relaxing. It’s like a sea we can dive in and swim out into.”

Maria D: “Yeah, and it being dark and brooding, that’s not really something we set out to do. Maybe we translated all that New Age stuff and made it ours?”

P/A: And the split with The Ex.. How did that come about?

Maria B: “It was several things, actually. We played a show together in Charleroi, and then some time passed and we did a tour in Belgium. Martin Vognsen who organized the tour wanted to do something more. He has a record label called JVTLANDT, and we discussed what we should do and decided on a split. And then it just made sense to do it with The Ex. There’s a nice connection with them.”

Jaleh: “We’d talked about playing with them again too, and put on an event at Mayhem where Arnold De Boer performed with his solo act. So there’s been an on-going contact with them and we asked them and they said yes.”

P/A: In connection with this release and Eget Vaerelse, I get the impression that artistic freedom is important to you. Is self-releasing a way of avoiding having to compromise?

Maria D: “There’s no profile or rules. It’s more of a cooperative; creating a space to be and to anchor your output. Though now it’s more and more becoming a label.. There are more and more releases.. we’ll see what happens.”

Jaleh: “We hadn’t thought about it as a label. I think that it’s very accurate to call it a work cooperative, as well as it functioning as a label.”

Maria B: “Yeah, it’s a way of keeping it very free. So people don’t feel restricted in their releases.”

Maria D: “It’s not really run like a record label either. No one’s in control!”

Maria D: “Yes, but there’s no one person who’s got the overview; we achieve that bit by bit.”

P/A: And what about compromises within Selvhenter itself?

Maria B: “As a band you always run into things that aren’t working. But it’s not like it has to sound like this or that. It’s more that things develop in their direction.”

Jaleh: “But it’s always a compromise to work together. So in that respect it’s just a question of finding out what you can do together. But that changes.”

Maria D: “I think we very often agree on what isn’t working. If it doesn’t feel right, then you just think: I’ll have to do something different. If it’s not working, we do it differently until it does. Sometimes we don’t realize [how it’s working] until we’re recording it.”

P/A: That’s what I like a lot about Selvhenter. It sounds very organic! Like it finds its form along the way. Like artistic instincts melding together.

Maria D: “I think each track has its own development. Take for example “Golden Boy” [opening track on “Motions of Large Bodies”]. I watched a video from 2012, and the track doesn’t sound like that at all anymore. So we have the same songs for a long time but they’re constantly changing.”

Jaleh: “I think you’re right… they’re developing for a long time. I think we quite often find ourselves in a place, where a song isn’t quite working, but where that’s OK and we’re kind of exploring and remain open to that it isn’t obvious what it wants.”

P/A:  And that it’s taking a new direction?

Jaleh: “Yeah, precisely. So these two new songs we’ve been playing at concerts even though they haven’t been completely finished… I think that means a lot in the process you’re talking about — the way they’re created. They have a long gestation period, and we don’t mind that things are at times a little chaotic.”

Maria B: “But if we choose to bring them to show it’s because we like them and we’re comfortable with where they are. ‘Cause there are definitely some things which aren’t brought to the shows, too!”

Jaleh: “I think that we’re also open to the things we don’t quite understand yet… Things that haven’t fully exposed themselves, but where you can feel a strong atmosphere. I think that’s one of the great things about working with you [directed at band]. That we can work with that, which is unknown, but  is exciting in some indefinable way.”

Sonja LaBianca: “It comes out of a fusion, and then afterwards we analyze it.”

Maria D: “There are many tracks where I’ve only fully realized what’s going on after several years.. You can play them for a long time and then one day you discover: ‘Oh, that’s happening too’.”

P/A: That’s what I think is exciting about Selvhenter; you get a sense that there’s room for play! Is your name a metaphor for embracing musical tangents and bringing the ball back in the game?

The band laugh collectively (in Danish selvhenter is a term used when playing ball games and someone shoots the ball way off course and consequently have to go and bring it back into play, it can also be a metaphor for correcting a mistake you made yourself), but while not intending for the metaphor to be there it is deemed humorously apt for the music.

Sonja: “Looking back I’ve had similar thoughts. The way we’ve done our own thing a lot, and done things in quite a non-traditional way. Perhaps to some people that is akin to shooting the ball far off the course, but we bring it back and put in into play again!”

P/A:  Where do your ideas come from?

Maria B: “It varies a lot. In the beginning we did it the hard way; long improvisation sessions where we’d stop when something was interesting, work with it a bit and then either keep or discard it. That took ages. Then for a while people came with finished songs that we’d then all work on, and now it’s a mixture. Sometimes it’s improvised.”

Jaleh: “And we’ve started working in teams a little.”

Maria D: “Yeah, that’s a new thing. A couple of people will start a track, and then we’ll send it around and people can listen and add. That’s a practical necessity”

Maria B: “Yeah, but it’s also a nice way to do it. It allows you to retain the energy, which you lose in those long, tough sessions. You can be a bit more impulsive!”

P/A: Did this come about from living in different cities?

Maria B: “We’re all in Copenhagen at the moment.”

Sonja: “For a little while.”

Jaleh: “But it definitely sprang from us living in different places.”

Maria D: “Yeah, you guys were in Berlin for a while and had a few drum rehearsals..And that affected the music.”

Maria D: “And then some tracks have started by listening to particular record. It gets under your skin, and suddenly you hear it expressed in the music: ‘Oh, that’s a bit like that record you were talking about’. Something comes into the process that everyone can work with, without being explicitly inspired by it.”

Sonja: “Or it can be books and films — a catalogue of influences.”

Jaleh: “I think about methods too: We have different methods and tools that we use to experiment on things we can then all share afterwards.”

P/A: You mention films. Your music sounds very cinematic at times, is there a visual thought process involved with creating the music?

Everyone agrees there’s a big visual aspect to the creative process:

Maria B: “I mean, it’s rare that we discuss notes…” [everyone laughs] but Sonja reels it in a little:

Sonja: “We do use a visual language, but isn’t it more the case that we create something and then afterwards we attach a visual association? I mean, I don’t recall us deciding that: ‘…now we’re going to play a mountain scenery’.”

Maria B: “Well, for example when we were deciding what should happen in “Stirb Langsam”, we talked a lot about light and darkness. You’d seen an exhibition [gesturing towards Maria D], and then we thought we could try to put that in to the mix too.”

Maria D: “But that is the whole thing about developing a track; coming up with ideas and solutions and directions. By for example explaining it as picture.”

At this point it’s time to set up and sound check. The show that evening is as baffling and mind-blowing as always; Selvhenter really have to be seen and heard live at least once! But the array of effect pedals and the unexpected sounds they produce from instruments you just didn’t imagine could make those sounds, make it onto their recordings beautifully. Just take a listen and let your ears get tickled: There’s so much to hear!

Info: The Selvhenter / The Ex split release is out now on Jvtlandt. “New Age” recorded in Mayhem in 2014 and is produced/mastered by Aske Zidore and Andreas Pallisgaard. Selvhenter will play at this year’s Roskilde Festival, as well as the H2Ö festival in Turku and Off Festival in Katowice. 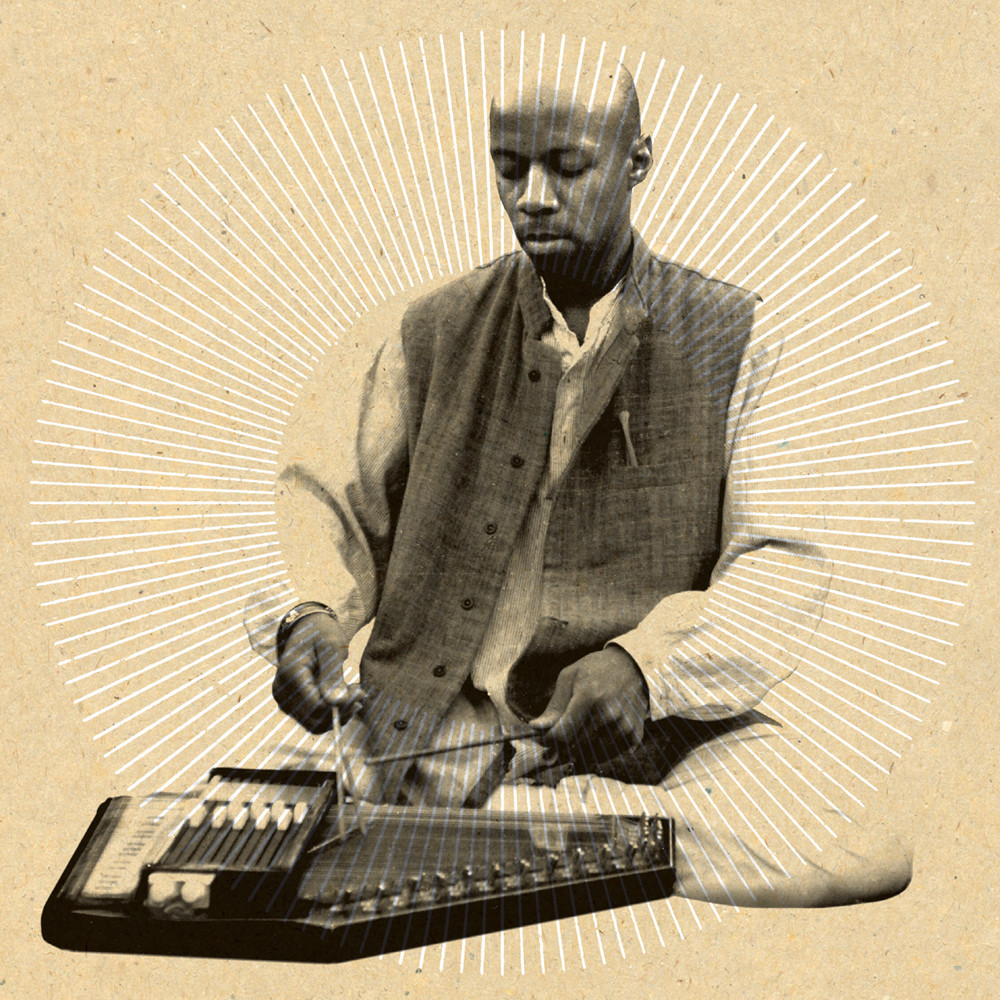 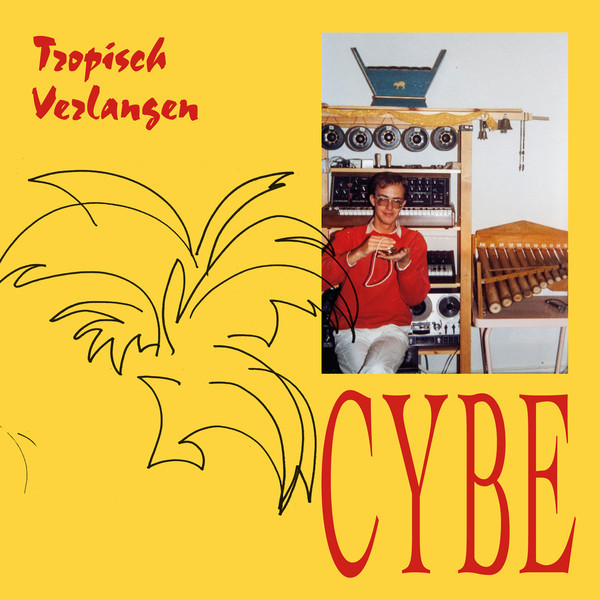