Vanity Productions “Only the Stars Come Out at Night” (Posh Isolation, 2019) – review by Cameron Pagett

It’s early in the month of June 2018. It has been a warm day and the sun has only set from view when I sit down at the crude outdoor tables that dot the rough asphalt lining to the entrance to Mayhem where a group of about 120 people are gathered. It’s a fairly busy night. Most of the crowd is quite young and for some it is their first time in the smoky lowlit din of Mayhem. The room is filled with white lights and the last of the candles lit in the beginning of the evening begin to burn their last in the moments before one of the final sets of the evening.

The imposing figure of local music legend Christian Stadsgaard stands behind the controls table taking in the final moments of pre-set fog before bearing into a set that would take most of the room by surprise. After releasing the album “Only The Grains of Love Remain” in the late fall of 2017, It’s not certain if anyone but him and some close friends had heard the new material he was working on in the buildup for a brand new record. Easing into the beginning of the performance I nestle up to one of the many pillars dotting the Mayhem floor and take in the opening moments.

It was nearly a year later and after much buildup and unrealized release dates the Stadsgaard’s EP – released as three different videos beautifully and tastefully filmed by local talent Anastasia Karkazis – was finally nearly ready and I was about to open the first video in a private Youtube-link. Only a month before people huddling on the floor of the upper room of the venue Ved Siden Af, me among them, got to hear much of this material live and the state of wonder was still glowing across the top of my sound veins. It was early in the morning as I pressed play, and early in the morning I felt tears leaking uncontrollably from my eyes during my first listen. A friend staying over walked in to see me bent over my laptop puffy faced and super uncool, “Are you ok?” she asked … “Yes, I am. I am more than ok.”

Stadsgaard himself will tell you that the link between the previous album “Only The Grains of Love Remain” and the new EP “Only stars come out at night” rests in a deep place of longing. Between love and chaos. More poignantly “Only The Grains of Love Remain” was a true breakup album from a tumultuous period in his life while the new EP is an ode to gaining back personal equilibrium. Understanding the new-found features in life after loss, getting back into the day again and moving forward. Employing a very surgical sound of needle sharp ambiance and a never failing knack for humongous walls of spatial bliss or chaos one get the feeling that more than just a technical exercise is unfolding. It is music that comes from the deepest levels of sentiment as if emotion could ring dry as water from cloth. For a figure so well known and influential in our scene this type of audio information can be construed as rare. Not one to divulge to willingly into his personal life, the notes of this release read like a painting of things unsaid. As communication from one heart to a collective.

In the first film, the scene opens with a close-up of water bubbles in a steel pot engaging in the first stages of boil. Glinting and rising as liquid glitter the track steers into a shimmering universe of expansive ambiance fit for a cathedral underlined by a certain playful, yet tingling sensation caught in the noise – inspired melodies ringing like a thousand little bells as the water in the frame reaches full boil. It grows and the pressure persists until an abrupt and astounding break where the loose narrative makes a first entrance.

A phone screen, a sudden revision of the score, a text being given, the message? “Meet me at the water, I want to start over.” It’s a slightly overcast day among the natural coastal beauty of Faxe Folkbrud a limestone quarry in Southern Denmark. Here the music begins to build into something more frenetic, a larger more complete vision of things left behind in the first watery moments. Less blinking and more solace as scenes flash across white and forgotten worlds where a minefield stands amidst numerous shots of nature and the environmental changes such an area contains. If a miner must dig from the depths to obtain a living the music dives deeper and harder into alternate landscapes framed delicately by the lens of Karkazis. It’s a feeling of rebuilding among the fallen stones in a ruined city. Dread ever-present, senses numb with anxiety. From the ground to the water, water to ground, Showtime Revision.

The camera looms, and in the opening sequence of the second film a window is displayed beyond the sparse remains of what appears to be an abandoned corporate office. Outside the window on a bland, soulless piece of concrete architecture reads “International Hotel.” The feelings begin to darken and we are invited into the deepest pits of a form of personal torment. Reflection takes hold and with the soaring, nearly windy feelings of ambiance the camera shifts among forgotten rooms in buildings unknown. Endless shots reflecting a loneliness and existential gloom swept from concrete to drywall to glass. It’s an emptying of sorts, a full evacuation of old feelings and habits while releasing old flames or watching the ashes crinkle and disintegrate. Dark and haunting in a daylit tone it’s a teleportation from old to new on the other side.

Ice sheets dot a forgotten world as if the tundra of Greenland awoke and whisked us into a new Ice Age. The third and final film which also bears the name of the full release shows us like, the ghost of Christmas, a future barren and hopeless world panning vertically above the frame of a boat stuck in the ice as if symbolizing the futility in escape. Dormant, stagnant and forgotten amidst the sheets of ice holding it captive it’s a stark contrast to the ending of the EP which hinges on the pausing effects of a gong-like matter. The camera stops above the ice encrusted boat once more, then the melody breaks into nothing short of a purely hopeful heartwarming pandemonium of what I can only describe as the sound that shows you your entire existence. Small, ever-changing and dotted with shining moments of personal growth and triumph. As the camera soars over the spectre of summer in the shape of melted ice and people joyfully jumping off the edges into the Northern Sea.

Intermixed and immortal the score takes one from the joy of summer to overhead views of landfills and windmills lying along the outskirts of Copenhagen. The visual of cleanliness replacing old doubts and guilt in the present moment while possibly reminding the viewer that moving on is possible, but forever weighted with the gravity of past trauma. Trauma alone however is only a passing thing, it’s best left behind in a roaring score accompanied by energetic winds propelling windmills forward into each day after night reminding all that indeed for some “Only the Stars Come Out at Night”.

White lights flash and blink in the smoke of Mayhem as Stadsgaard moves into the final movement of his set. It’s been an involving half hour and for the first time his computer steers into the finale in what would become “Only the Stars Come Out at Night” a year later. It seems like a dream at this point, a long remembered dream of beauty and contentment as many huddle along the floor. Some kiss openly and I am drawn to a person who would become one of my best friends in the following year. With warmth and gratitude we join like two comrades finding the dawn after weeks lost in a deep cave. For the moment this level of expansion was new, vital and a revelation in the wide world of electronic music and a certain thankfulness in how intense a Vanity Productions show can be fills the room. Pausing on a knife’s edge and transitioning deftly into Only The Grains of Love Remain from his previous work we are swept into a chamber of unbroken solace. Thats where this work found us.

It’s a curious thing, the current electronic landscape. With so much content and an endless supply of experimentation sometimes even to the most trained ear it can become nauseating and nearly impossible to keep track of. Is it de-constructed? Re-constructed? Candy Pop? Industrial? Neo-Gabber, etc… While the debate rages around the frontier fringe we in Copenhagen can find ourselves peering into it takes a measure of courage and stability to produce something that sounds like this. Is it groundbreaking? No. Is it Avante-Garde? Not entirely. Is it pushing technical limits? Not necessarily. Is it the new thing? Not really. So why then can it be characterized as important within a certain sphere of musical experience?

Sometimes one can come up against a wall of examination in which facade dissolves into something entirely individual. Emotional and complex beings, at times in life we are denied our own keys to process and self-realization for a menagarie of reasons. Among the moving canvas displayed in “Only the Stars Come Out at Night” it can feel as if you are listening to an artist plunge into themself and honestly mine from among the heart’s tunnels a clear sampling of challenge and subtlety flowing within. This can take on a measure of meanings and forms, but the overriding theme or reality of this phenomena never fails to emit a heartfelt reaction from even the most hardened person. The feelings shown and displayed into our ears in this EP give the listener something anyone who loves art will value and crave … Honesty and authenticity. He may be a local legend and as the rest flawed in numerous ways, but this is his best. Put your headphones on and reach into the inner dimension. Don’t hold the tears back, it will fix you.

Special Note for Anastasia Karkazis – Deeply inspiring and emotive work behind the camera. She made something already wondrous a real work of magic. 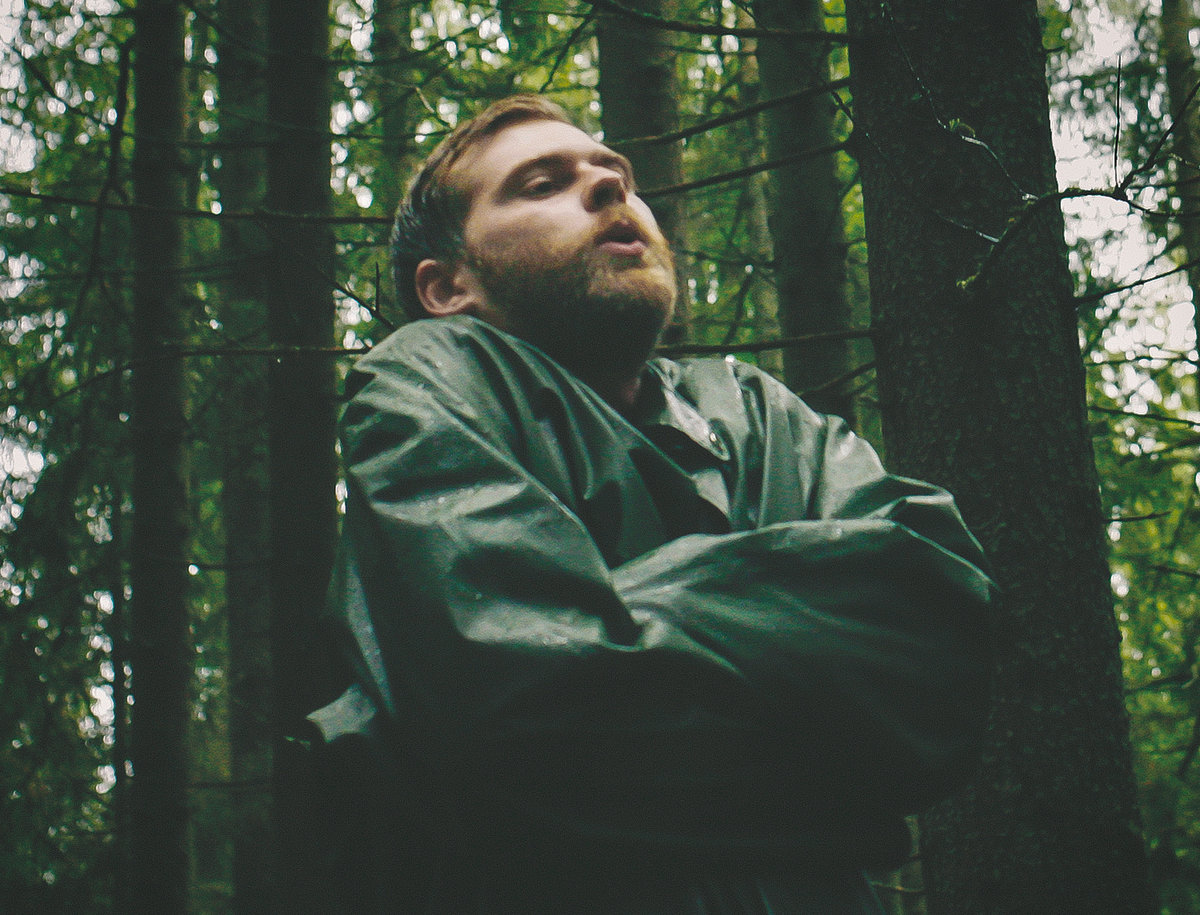