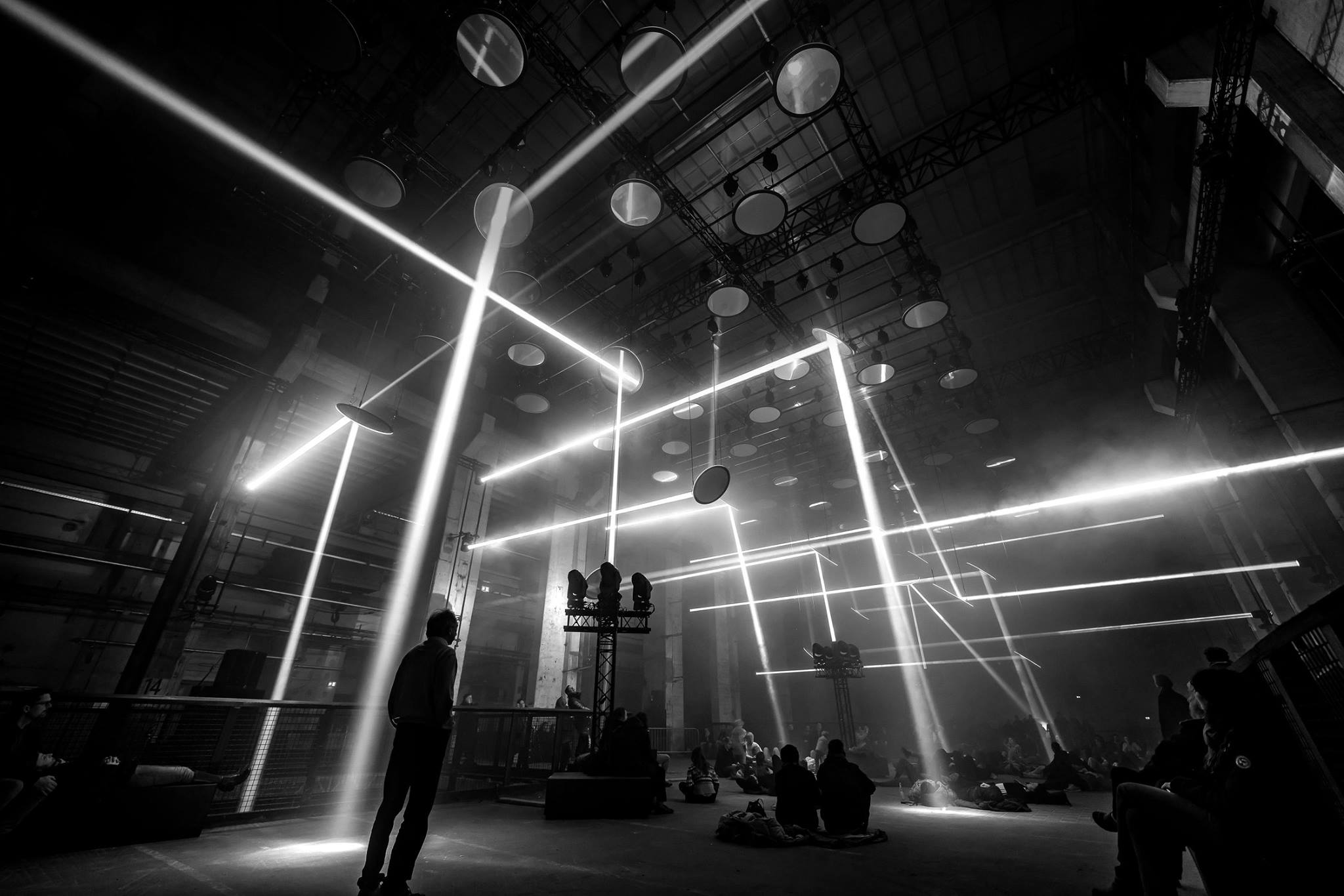 “The world is in turmoil” declares the CTM Festival for Adventurous Music and Art in the programme. The festival has long been notorious for its critical voice in music culture finding grounds within the turbulent political climate we are witnessing today and taking a strong stand against inequality and essentialist identity politics of all sorts. With a rich and diverse programme of concerts, performances and lectures showcases music from different aspect. Here are some thoughts on the festival and some music highlights during this year’s edition of CTM festival in Berlin.

The day programme has gained more and more space at the festival over the past years and includes workshops, artist talks and more theoretical lectures on sound, music and beyond. Tuesday’s schedule included a full day dedicated to female-identifying organizers in music hosted by the Berlin-based collective Salt+Sass aimed to spotlighting women organizers in the industry, taking the debate on the gender imbalance in music culture. Eleven women-identifying curators, promoters and editors briefly presented how they made their way in the music industry, throughout the different voices the message was clear, the dwelling on the “why aren’t there more females in music?” angle is bygones and days like this is a celebration of it. 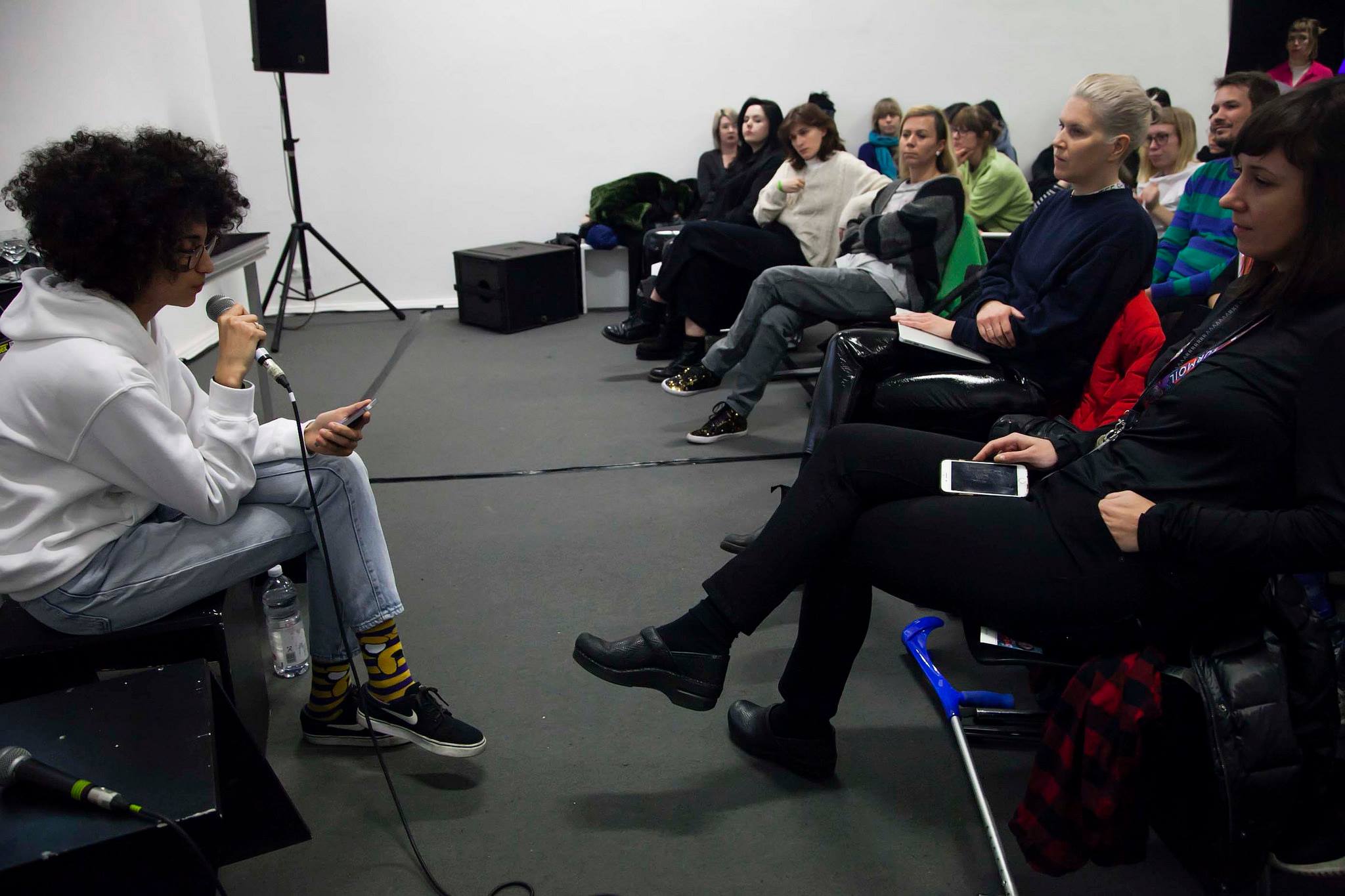 Another highlight during the daytime, was George E. Lewis, professor of American Music at Columbia University and Area Chair in Composition. Lewis gave a lecture titled “Why Do We Want Our Computers to Improvise?” on practices of free improvisation by machines in music. His brilliant thinking and theorizing was beyond inspiring. The forward-visioned, well-structured and humorous lecture was followed by a talk together with the Chicago-born multi-instrumentalist Roscoe Mitchell, reflecting on their long-term collaborative activities here among their performance with ‘The Voyager’ – an improvising AI computer system made by Lewis back in 1993. Towards the end of the conversation a question from the audience occurred (quoted by memory): “Art is the most meaningless in the world, and at the same time art is a symbol of freedom – how do you balance these to practices?” Lewis answered without any form for hesitation: “Freedom is not something giving to you but something you work hard to obtain and fight for it.” And there were no further questions. By this Lewis draw a realistic perspective between his practice as a theorist, artist and human exposed to the political issues.

The rediscovery of Ernest Berk

A notable aspect of the festival was a special emphasis on the intersection of music and dance with a tribute to the life and legacy of the unsung choreographer and composer Ernest Berk. Over three evenings Ernest’s music and dance was presented, interpreted and explored.

The second night of the trilogy was together with Group A, Rashad Becker and Pan Daijing. The evening started with the story of Berk told on a screen above the stage at HAU2. In short Berk was especially interested in an expressive form of modern ballet and later he started to experiment with tape and electronics. After his death all his tapes was bequeathed to the historical Archive of Cologne. Tragically the archive building collapsed in march 2009, but before this catastrophic event occurred all Berk’s master tapes were successfully transferred into a body of work that stretches over three decades and includes more than 200 compositions. Ten pieces was played accompanied by one or more dancers. The sound was tape recorders, tone generators, filters, ring modulators, echo units and explored both microphone-oriented mystique concrete and oscillator-based electronic music. Also drumming was a central element in the sound collected percussions from round the world.

Ernest was central throughout the evening both with short glimpses of previously friends and colleagues sharing insights on Ernest’s aesthetic being. The next part of the evening the dancers entered the stage completely naked together with the industrial-noise duo Group A, who showed off exactly what has made their reputation: combining raw synths, drum machines, violin and cassette tapes they whipped up an electrical storm of clanking beats and swooping violin, that made the eleven naked dancers arcane movements and completely hypnotized the audience speechless but doubtless impressed. The wilderness of the dancers mood was amplified by Group A’s electronic soundtrack which combined a peppering drumming rhythm pattern and harsh burst of noise. That challenge us, the audience, to explore beyond our personal boundaries and discover new stages of interrelations between humans, which the dancers was a living example of.

Afterwards Pan Daijing and Rashad Becker to the stage literal mirroring each other in same outfits and Becker in a black wig – which had me wondered if I had misunderstood something. But his sounds is unmistakable. Inspired by the working methods, musical structures and textural directions of Ernest. The two radical experimentalist suited each other and rounded up the evening with a more abstract and modern take on Berk’s sound. 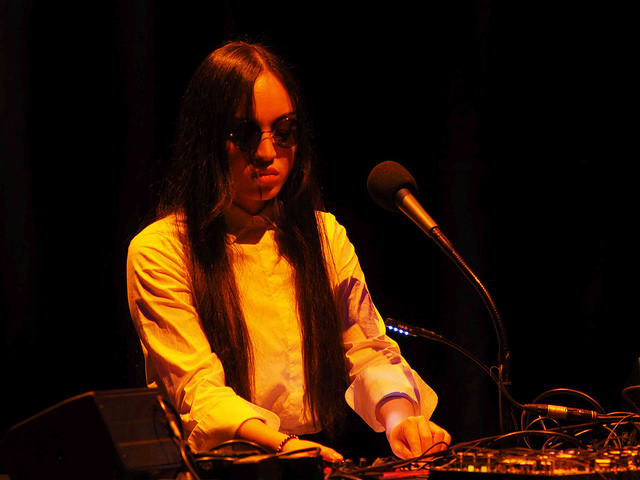 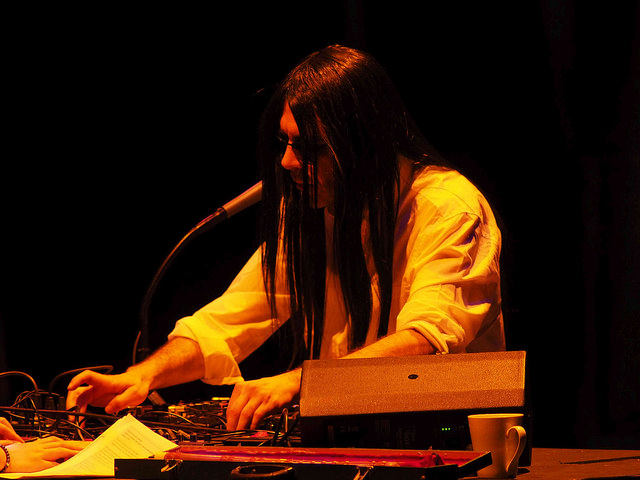 The future is technology – James Farrero, Skalar and MONOM

Among tumbling animations with a collage of fragmented images of sterile labs, numbness human faces and decreasing charts of economic wealth repeatedly projecting in random order in what was supposed to illustrate a purgatorial wasteland of physical and digital sewage. The audiovisual performance ‘Plague’ was the strangest moment of the festival. The piece was a commissioned performance by musician and performer James Ferraro. In collaboration with visual artist Nate Boyce, PHØNIX16 and the actor Nate Boyce. After a long intro with blasting sound and flashing strobe lights a crawling man wearing a turtleneck entered the stage as a sniffing dog and from that moment the performance struggled with the audience’s disappointment that ended in a silenced applause by a confused crowd. It was a hyped-up nightmarish vision of a post-digitalized world transforming environments and reflections of a non-interrelations world, were clearly at the core of the narrative. The performance seemed in contrary to the festivals overall standard of curating. We can only hope that if we collectively make uncompromised decisions, we will not end in a world visioned like here.

However, other visions were presented with a complete opposite relationship towards technology. The light installation SKALAR by Christopher Bauder together with a soundtrack made by Kangding Ray and the 4D sound space MONOM showcased how incredible work of art, technology can create. Both spaces was mesmerizing to walk within and mometararly breathtaken to say the least.

Amongst my personal music highlights of the festival was the Chicago-based Jana Rush’s live performance at Panorama Bar Friday night that ended in a mixture of old classics with the theme from Super Mario and taking the mood to a good place. There were also a massive amount of love staging at the performance by Holly Herndon’s Ensemble. The ensemble amplified the love and as a set of individuals they showed how much power you can achieve in a collective. Even though the concert had a few technical issues and clearly was a work in progress. It was admirable how much they enjoyed being on stage. Alone by perspective it was one of the peak performances of the festival. Also the concert with Equiknoxx featuring Shanique Marie was a massive joy spreader. These performances might be the positive interpretation of the festivals theme Turmoil.

Whereas Friday night at Berghain sounded like a the spirit of turmoil and the aesthetic of horror. Last year hardcore made its full comeback and CTM had locked the entire main floor at Berghain to the sonic mayhem of brutal beats, Hoover synth noise, the 8-bit Atari computer game sound and an escalating BPM. The uniform of the night sporty tracksuits and shaved heads with a iconic tribal stamp in the neck. In-between the sound from the archetypal TR909 and breakbeats rolling sporadically interrupts with enthusiastically shout outs and the floor yelling to well-known lyrics such as “there’s no party like the alcohol party!”

So, things we learn at a heartfelt performance is a precious thing.

In conclusion, the CTM festival can be seen as an agent of emancipatory art which I applaud and promote. A festival like CTM is not only a space for debate, enlightening and sharing art and knowledge but also a platform for the marginalized voices to break through and present another perspective on present social and political twist and turns. We might ask ourselves why homophobia, misogyny, and structural racism still are thing we have to fight against. And it is not something a music festival can change alone but it is encouraging to see organisers taking some responsibility and a desire for a positive change in a world in turmoil. 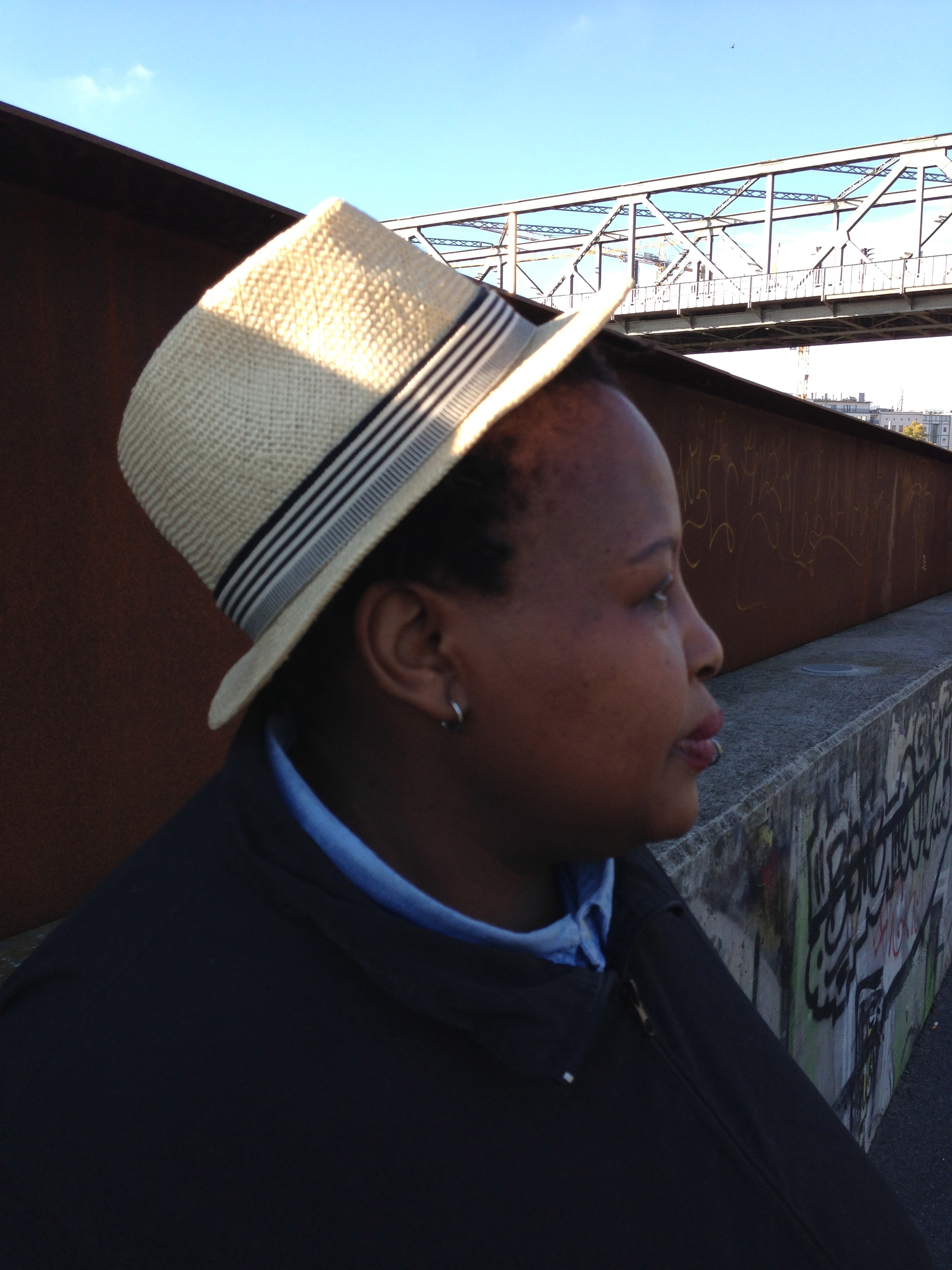