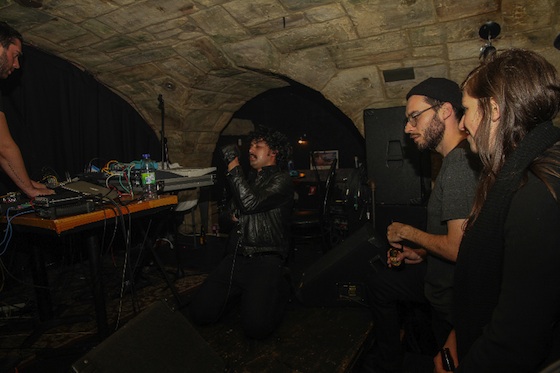 P/A: What is your driving force when making music?
B: Really, it’s everything, but lately, especially with Femminielli Noir it stems from a negative output on everyday absurdity.

Would you describe your music as conceptual? Why?
B: Yes, although I’d never planned for it to be…things kind of panned out that way. It’s like, when I’m making music, or art, or whatever you want to call it, the experiences and states I’m living through are transferred to the medium. It’s not as “intellectual” as it may seem, it’s more sensible and primitive; you live through stuff, make peace with it or don’t, and it automatically applies to what you’re doing. The moment becomes the concept.

What role do you think “absurdity” plays in your work?
B: A big part of what I make (lyrically) is absurd, but these are only “stories”, or a way of browsing through philosophies. I’m not trying to convey that I am a parody, a specific caricature, but rather shuffling through thoughts and building a dialogue from different ideas. I’m very interested in the contradiction of words and actions; it’s fun to adhere to different opinions and see where this takes you… it leads to very interesting discussion. Even in interviews, concepts, flirting, relationships, whatever; it’s important for me not to always reveal what I really think, to go with it and see where it takes me. It’s fun and adventurous.

Do you label your music as sincerely serious or do you think that it reflects humour as well? Especially when it comes to sexuality in your works…
B: It’s both. The seriousness and parody are derivatives of the sensual rapport I have to the stories I make up… Sexuality is something you don’t really need to think about, it’s so blatantly imbedded in culture, art, the world, ourselves… Sensuality is more interesting, as it can be more vague and mysterious, very playful and malleable, especially in a creative context. Sexuality is what comes after sensuality, to me it seems more structured and played out, you have more chances of recalling the negativism in it, feeling embarrassed, shame and confusion when thinking about the events afterwards… Sensuality is more fluid, and doesn’t necessarily need to be sexual, it can stay in the romantic domain, it doesn’t need to lead to sex it can take you elsewhere.

You’ve worked as a composer for a number of films. How does this affect your records?
B: I’ve mostly made music for friends who’ve have made short-films. They’re good platforms for sketching out ideas and linking stories and music. Really though, I would rather be an actor than a film-music composer.

Why have you chosen to sing in French? What tools do you find in the language itself? Do you ever find it challenging to break through on an international scene because of it? Would it be a compromise to sing in English?
B: Of course singing in French or Spanish limits the audience, but I don’t really think about that. The tone of language is way more interesting; the way you can apply it to the music, the way you can use it on stage, the way the words roll on a specific sequence…

Often times, even the grammar and syntax are wrong, misspelled, disjointed, crookedly blurted out, cut-up – but this makes it more engaging, it leaves the writings open to interpretation and makes it more real for me. I’d love to include English and other languages, to mix dialogue and to expand on the possibilities of relating to different ethnicities while at the same time complexifying the music, I just haven’t gotten around to it yet. Also, this thing where people from everywhere sing in English…I get it, it’s international, there’s nothing wrong with that… but I like to encourage people to sing in their own language, to experiment with that, rather than abiding to an industry standard.

Your music seems to draw inspiration from a broad spectrum of different genres, but are there any specific ones that you’d say have bigger influence on your work than others? Disco for example?
B: It always depends on what I’m living at the moment. I’ve had times where I’ve wanted to only make boring, stagnant, ambient music, because that was my state of being. I’m interested in telling a story, in writing an abstract poem… and the vehicle at the particular period you’re referring to was Disco. This genre is used to get stories across – Harsh Noise or Industrial music would not have worked for my themes, so it made sense that the music be Disco-influenced… It’s also a question of my way of approaching various popular musical genres. Exercises in style are challenging. Asking yourself “can I do this?” and trying it out is a way of not repeating yourself too much. I’m not trying to construct a specific formatted image. I don’t want to be the “exotic Latino variety singer” or the new Moroder, or whatever. I just do what I do, and I don’t give a shit about tagging a genre onto my name/face.

When & why did you start to collaborate?
B: There was an essential creative energy between us that we could not ignore, so it all came very naturally. Things were interesting from the very start; when we met, in conversation and opinions, it was easy to come up with ideas and points we could both relate to. It would have been stupid not to collaborate. We’ve amplified our awareness of our surroundings and have gained consciousness by engaging with each other, we feed off of each other non-stop.

We both feel very removed… this feeling linked us from the start. We embraced it, worked with it, and shaped it into Femminielli Noir.

J: It started with conversations sparked by the feeling of detachment from the everyday local music scenes and the disdain of knowing we’d just barely started this endless fall down the music industry’s infinite shit-hole. Talking and sharing our personal experiences, we ended up wanting to make stuff together. It was the two of us having a lot of the same outlook on life that gave birth to Femminielli Noir.

For both of us, this project has become a very important thing since we are basically supporting ourselves on our own right now, working with few select close friends, trying to avoid the feeling of being exploited by the usual trend-setting machines. We’re rarely and hardly gaining any satisfaction by associating with the usual entitled figures, so the only thing we can do is believe in the project, and keep going with the flow.

How do the themes of Femminielli Noir vary from Femminielli?
B: They don’t. They more or less stem from the same roots. It really depends on what input Jesse gives, and how we decide to work together in a particular moment. When I’m alone, the end-result is more introspective, romantic… With Jesse it evolves into something impulsive and abstract, it takes on a different form.

You’ve already finished the work for your two forthcoming releases: “L’Éveil” and “Malas Influencias”. Why did you want to release them as separate records and in different formats (cassette and LP)?
J: We recorded both albums at different times. The concepts and music are divergent. Although the continuation between them seems logical, L’Éveil took a long time to digest… Even now, it feels like we released it before we got too uncomfortable with it again. It was our first recorded piece, and so we felt we had to do something with it. The work flow is getting better and so we don’t have to sit as long on Malas Influencias.

There’s still a gap between the two releases, but we’re trying to get them out there as soon as possible. Next to each other, they can really give a taste of the different spectrums of the project, they compliment each other.

B: The cassette format feels good for L’Éveil; more obscure, less refined, easy to put out. Malas Influencias feels more achieved and is very club-oriented, it’s just natural that it would come out on wax. There’s one for the cerebral shitheads and one for the anti-cerebral shitheads. I’m saying this with a laugh, but… that’s the gist of it.

Are there any specific reasons behind the choice of titles for “L’Éveil” and “Malas Influencias”? Do evil and violence appeal to you somehow?
J: The titles speak for themselves. They’re rooted in somber concepts but are free to interpretation. What seems violent and evil to some might be positive and enlightening to others, it’s a question of perception.

When I confront, challenge or face these negative themes, I gain and learn. The end result is tremendously positive… “Evil” and “violence” seem too easy though…

B:  Peoples’ dishonesty and jealousy (including mine) are far more interesting… Manipulation, bad influences… To me, this is far more engaging and honest than straight up “evil’ or “violence”. It’s not about playing the “we’re dark” card… We’re living a very superficial time – a disjointed, hybrid, lost era where people are climbing up on top of each other like never before, exponentially. Looking at all of this from a metaphysical perspective is very stimulating.

You have stated (as F. Noir), that you “have decided to work for the better understanding of the future of conceptual music and performance”. Why do you find this important and how do you work towards this goal?
J: (That statement is meant to be ephemeral. We constructed it using a “bullshit generator”, but it still does resonate with us…). We are clearly over-saturated by music, performers and art, (including our own). I think the more we understand how the business works, (and I’m far from being a pro at it), the more we realize that it’s nonsensical rubbish. More often than not, it’s not about the material (art / music) itself, but about how you can shape it into something marketable…

Anyone can be propelled onto bigger platforms at any time, if they have the right connections, are at the right place at the right time or have enough money or PR… I feel that luck plays a big role in the determination of “success”. This is very interesting, as it makes competition arbitrary. What drives us, what we practice, is making music, recording, expanding on ideas, bettering our understanding through creativity… It seems that to be able to keep doing these things, you have to smuggle your way into the corpo-game: shake it up or become a part of it and get fucked. I feel very disillusioned by this negative industry-made-maze. It’s a driving force though, it’s okay to bite the hand that feeds you sometimes, be a bit edgy…

B: I agree with everything Jesse said. You’re only important or worth respecting when a known platform says you are, and, so far, that never lasts very long… We are channelling our bitter thoughts into our creations. Keeping on living, keeping on denouncing. People are so up-tight, it’s ridiculous, let loose. 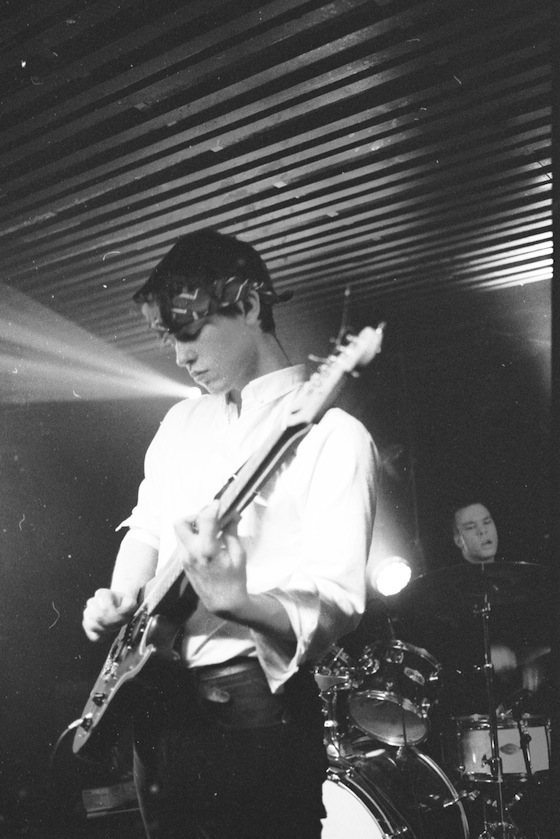 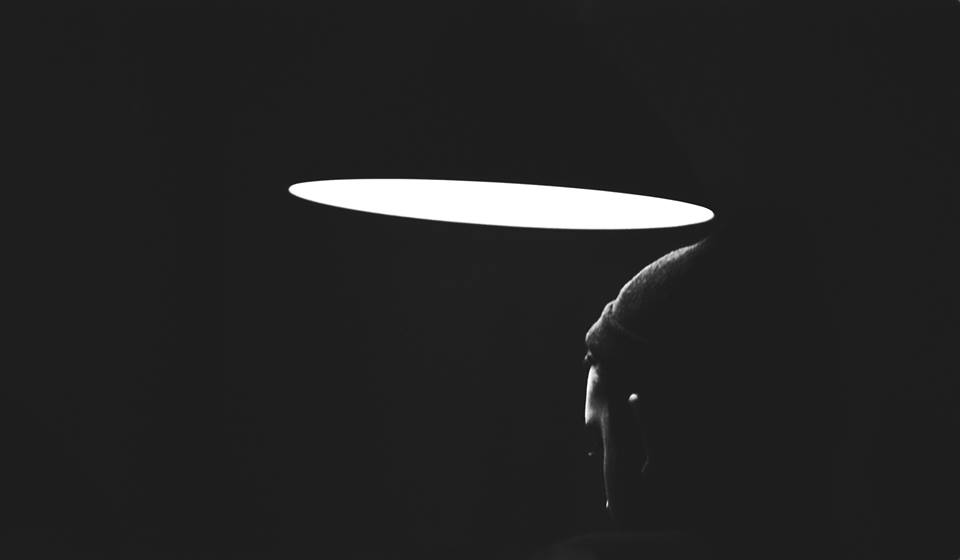